The other day I wrote how Tucker Max and his publicist, Ryan Holiday, were trying to gain publicity following a failed attempt to donate $500,000 to Planned Parenthood.  A bunch of websites subsequently debated whether Tucker Max was a misogynist. Maybe he is.  Maybe he isn't.

What matters is that I thought the $500,000 amount was bogus from the start.  I'm not naturally a cynical guy, but this is Tucker Max.  Also, his publicist has previously been caught lying about extravagant money deals.

Since then, Max and Holiday both made updates in which they addressed where the charity donations ultimately went.

In an update for his Forbes article, Holiday wrote:  "Ultimately donations were made to a handful of other charities instead."

Tucker Max posted a rant on his website about the whole deal.  Halfway through, in parentheses, he wrote:  "anyway, I found charities who were happy to take it."  So, neither of them specifies how much money was eventually donated, or where it was donated to.
Posted by Jeremy Massler at 1:00:00 PM

Alright, I made a screenshot of Baseball Prospectus's ever-changing 2012 predictions.

Last year, I noted how Baseball Prospectus listed the Tampa Bay Rays' playoff chances as 0.0%.  Zero percent.  Of course, the Rays made the playoffs.  I wonder what supposedly impossible things will happen this year?

Already, the Mets are in first place. 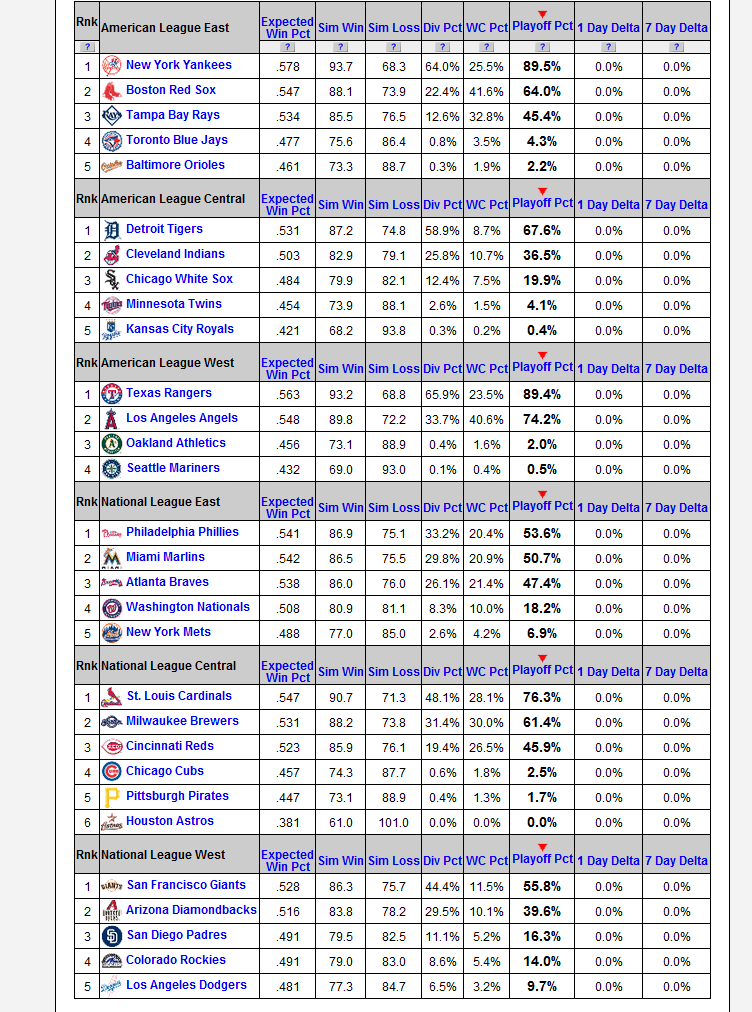 Tucker Max, the author and the former nemesis of the Massler family, was in some news yesterday.  Tucker's publicist, Ryan Holiday, wrote an opinion piece for Forbes talking about Tucker's unsuccessful efforts to donate $500,000 to Planned Parenthood in exchange for getting a clinic named after him.

Several blogs explained Planned Parenthood's rationale for rejecting the donation, but I think they're missing an important detail:  I don't think that Tucker Max ever tried to donate $500,000 in the first place.  Last November, Ryan Holiday tried to spread a fabricated story about signing a "major" book deal for (allegedly) $500,000.  The Observer soon revealed that it was a hoax with the sole intention of garnering publicity.  They ran some excerpts from Ryan Holiday's book proposal, including this one:

"The press release announcing the sale of this book is the perfect opportunity to create a compelling yet fake spectacle about the book. Relying on the fact that blogs and media outlets simply take for granted whatever is stated in a release, we will state in the press release that the advance given for this book was a spectacular sum."

So now, Ryan Holiday is trying to start another controversy which coincidentally involves the exact same amount of money.

I left a comment on the Forbes post asking Holiday about the Observer article, and why his story should be trusted in this case, but the comment was deleted.  (I assume he's the one who deleted it.)  So I left a second comment, and that was deleted, too.
Posted by Jeremy Massler at 10:31:00 AM No comments:

I don't usually laugh at random YouTube comments, but I went to find that Gillette "Around the World" commercial, just to make sure it wasn't an actual promotional stunt, and one of the top comments read:

fuck this commercial. shaving on a﻿ boat in italy. shut the fuck up the only
thing that didn't change was my razor fuck you

I think the lack of grammar makes it better.
Posted by Jeremy Massler at 3:39:00 AM No comments:

I had a brilliant entrepreneurial idea:  All the yoga mats I see people carrying around on the streets are a solid color:  Purple or teal or maroon or whatever.  But what if you customized yoga mats with a picture of your choice?  They could be as varied as beach towels--more varied, in fact.  Grandparents could have pictures of their grand-kids.  Guys could put pictures of hot girls on their yoga mat--which would make the hour spent doing yoga far less boring.

But then I saw that bitch Jennifer Aniston presenting one to Oprah on her show.  So much for that idea: http://www.youtube.com/watch?v=Zv-SGyZb4_0

I'll have to come up with another idea later this week.
Posted by Jeremy Massler at 6:16:00 AM No comments: