There was a fake screenshot circulating on Twitter recently, showing a tweet supposedly sent by Rachel Maddow asking for the President to be "taken out."  Maddow, on her own Twitter page, acknowledged the hoax and shook her head at the thought anyone might believe it:

No, I didn't tweet this or anything like it. My actual tweets are at https://t.co/vHrHK6rzdd Come on you guys... seriously? pic.twitter.com/YPD2olbX8o
— Rachel Maddow MSNBC (@maddow) January 23, 2017


I just lost all respect for you @maddow I can't believe you just tweeted this. I'm glad you deleted it, but it's still wrong. #SeanSpicer 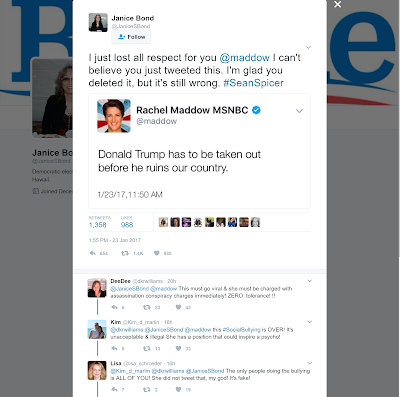 When I saw the tweet, I genuinely wondered if this old woman had lost her mind.  Her earlier tweets felt more-or-less normal.  There actually is an elector in Hawaii named Janice Bond, and she led Bernie Sanders's campaign on Kauai.  Earlier tweets from @JaniceSBond's timeline said she was planning to cast her vote for Sanders.  And on December 19th, a Hawaiian elector did cast a dissenting vote for Bernie Sanders.  However, that vote was cast by David Mulinix.  The three other electors, including Janice Bond, all voted for Hillary Clinton.

It wasn't until I found an article from TheGardenIsland.com, which profiled Bond, that the situation became clear.  The article described Bond's thought process leading up to the vote, and included this paragraph:


But it wasn’t over for Bond. Someone later called to tell her a fake Twitter account under Bond’s name was created and it declared she voted for Sanders. Not true. Not at all. She was unaware of it and set a new course to have it taken down.

So @JaniceSBond was under the direction of a troll since December!  It's kind of ingenious, when you think about it.  The troll picked an old lady who wasn't famous, but whose duties carry great political significance.  She didn't have much of a Twitter presence, so she didn't have a large platform from which to debunk the troll.  And he effectively played up the narrative that some electors were overly loyal to Bernie Sanders.  Then he waited a month before striking again.

Another question I had was whether @JaniceSBond originated the hoax.  So I looked for the earliest instances of the image.

2:03 P.M., @CHughes63 tweeted "@JaniceSBond @maddow Another threat sounds like calling for someone to kill the President no other way to take this tweet"

Those were the earliest traces I could find.

On January 6, 2017, Kim LaCapria of Snopes.com wrote about a similar hoax in which a Twitter account called @Fox_News_Yemen was spreading screenshots of fake tweets supposedly made by DeRay Mckesson and Shaun King:


Both tweets were seemingly intended to stoke racial tensions by suggesting well-known civil rights advocates tacitly approved of the Chicago incident. A common ploy to pass fake tweets off as real ones involves (falsely) claiming a given tweet was briefly published and then rapidly removed, preventing users from viewing the tweet directly and verifying its authenticity. Donald Trump is the frequent target of such falsehoods, and Mckesson has also previously been the subject of fabricated messaging screenshots.