For a while on Sunday, the #1 trending YouTube video was a bootleg version of the "Melissa McCarthy/Sean Spicer" sketch from SNL.  The video was uploaded by a YouTube channel named "learn more."  When I took a screenshot, the "learn more" video has 285,145 views.  At the same time, the official version from Saturday Night Live's channel had 315,910 views: 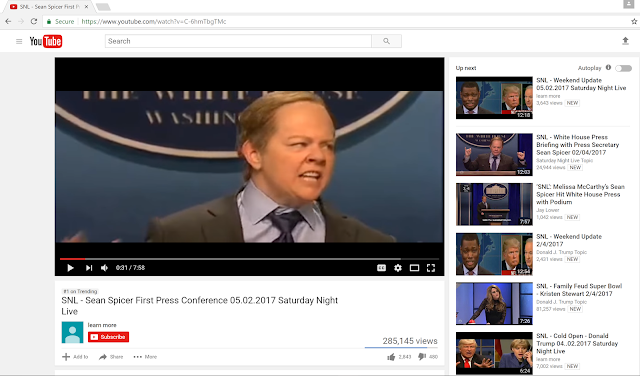 If you're asking why the video with the greater number of pageviews wasn't the #1 trending video, that I don't know.  However, I find it interesting that the bootleg version proved so immensely popular.  The footage was low-definition, and the camera had zoomed in.  You couldn't even see the full picture!  It didn't matter.  Hundreds of thousands of people just wanted to see the sketch and didn't care about the quality.

The video is gone now, and in fact all but one video from the "learn more" YouTube channel have been deleted: https://www.youtube.com/channel/UCr9x8sYHLWhhDSC-FNtMOfw.  Earlier, the channel had contained other bootleg versions of Saturday Night Live sketches.
Posted by Jeremy Massler at 9:30:00 AM