12:05 A.M.
I'll see how long I can go today with only checking Wreddit.  I don't think the frequency really matters that much, so much as making sure I don't visit any other sites.  It's the other sites that cause the distraction.  Sometimes, if there's nothing new on Wreddit, I'm tempted to check the F4W board, or I check other subreddits like /r/movies, /r/television, /r/nfl, /r/drama, or /r/askreddit, and I want to avoid that.
12:55 A.M.
There was a flurry of posts on Wreddit centering around some tweets from Steve Austin and CM Punk.  The first, by JoeM3120, was titled:  “Stone Cold” Steve Austin and CM Punk team to combat some Bleacher Report “fake news.”  It contained this image: 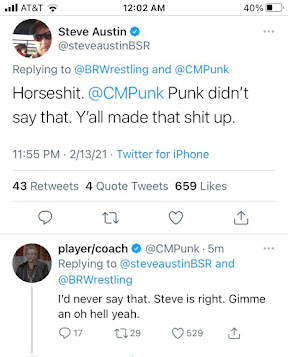 The next post, by  Luchador1916, was titled:  "Steve Austin exposed B/R wrestling."  It contained the same Austin tweets, as well as the original tweet from Bleacher Report.  The Bleacher Report tweet said ".@CMPunk’s response if he ever went one-on-one with @steveaustinBSR 😅," and it contained this image: 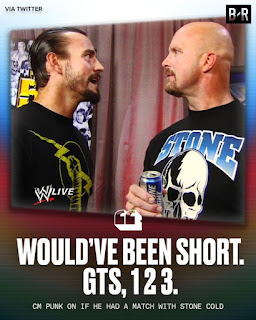 So that's two people applauding Steve Austin and CM Punk for "exposing" fake news from Bleacher Report.  The problem is that CM Punk really did tweet that out a couple days ago during an #AskPunk session:

The next two posts, from YBpleasegohomu and JoeKool23, were titled "Steve Austin responds to CM Punk on the match that *should* have happened" and "Stone Cold responds to CM Punk’s tweet about a possible match," and contained this tweet from Austin acknowledging really had said the earlier remark:

I see. @CMPunk You did say that. Damn.
Complete delusion. I had us at a 60 minute time limit match at the Rosemont Horizon. Right there in Chicago. Chi Town. The Windy City. Helluva match.
Caught you with a Stunner at 59:56. You did not kick out.
Bottom line. 💀💀💀 pic.twitter.com/4Mcr6PqD5E