8:00 A.M.
I'm at 209.0 pounds right now.  If I just eat normally, the way that normal people eat, then I should stay at that weight, right?
3:40 P.M.
There was a Wreddit post this morning summarizing a brief news bit from WOR.  The top commenter wrote: "I too watched Smackdown Dave."  The next person replied: "Again just him stating something on a radio show, no article on the observer website or in WON at all. Blame op if you think the post isn’t ‘news-worthy’ enough, not Dave who literally just made a comment in passing."  And that's amazing when that type of thing happens.  People have this habit of summarizing random bits of news from WOR.  Sometimes they're interesting bits.  Sometimes the news bits sound obvious.  (In this case, Meltzer was saying Logan Paul would be involved in a match at WrestleMania, which is both newsworthy and not surprising.)  Then you see people making "$11.99" jokes, making fun of anyone who would subscribe to F4WOnline.com.  But a couple times in the last few days I've seen people pushing back on this snark, and saying, 'Hey, why are you ragging on Dave just because someone else wanted to post this?'  So then that "$11.99" meme starts to lose steam.
There was a thread yesterday by SuplexCity-Mayor which was just a tweet from Dave plugging some random news from the latest issue of the Observer.  You don't usually see people sharing tweets from Dave when he's just plugging the Observer, so on the surface it came off as a weird post.  And the #2 comment (which had been the top comment for a while) said: "Not much point linking to a tweet that few people can see just to trigger people."  The tweet itself said: "Dave Meltzer on Twitter: "AEW sets overseas ratings record.""
If people start questioning why the OP was sharing something, then the memes start to lose steam, because people start to realize that it isn't Dave Meltzer who's shaping the narrative of SquaredCircle.  It's the people who are picking-and-choosing which of his tweets or which of his comments from Wrestling Observer Radio to share. The perception of his, at least on Wreddit, depends on what people share, and how they share it.  Every time you share something on Wreddit, you're transforming it a little bit, but that's a more abstract thought.

I don't know why SuplexCity-Mayor chose that specific tweet to share.  It was such a random tweet that the simplest explanation might just be that he's a bit dense, or he's just padding out his submission history.  I mean, if he's a subscriber to the Observer, then he could've opened up the actual issue and copy-and-pasted the portion that Dave's tweet was referring to.  But he didn't.  He just posted a tweet which itself linked to the Observer, and the tweet itself was vague on details.
4:10 P.M.
I'm keeping a list of movies I watch, and my arbitrary cut-off is 70 minutes.  If a documentary or whatever is less than 70 minutes, then I don't consider it a movie.  It's just a long TV episode.  I just watched a documentary on HBO: "6 Days to Air: The Making of South Park."  It's a great little documentary, but I'm not going to include it on my list because it's not very long.  And, you know, if it were longer, it might be boring.
5:05 P.M.
There were two Meltzer threads a couple days ago covering the same portion of a recent WOR episode.  The first was titled, "Dave Meltzer says you can make the case that Thunder Rosa/Britt Baker was better than any Randy Orton match in history."  The other was titled, "On the most recent WOR, Dave Meltzer & Bryan Alvarez actually debated and agreed there is an argument that Britt Baker vs. Thunder Rosa Unsanctioned was better than ALL of the matches in Randy Orton's career, save for one or two that were "at the same level"."  Two different people made a thread about the same thing.  So you get a lot of commenters disagreeing with this.  And, incidentally, both threads were removed by the moderators.  (The second thread was flaired as: "Repost - sorry this has already been posted recently.")  Each episode of Observer Radio is between 60 and 80 minutes, so you could would have a lot of choices in terms of picking which section to post on Wreddit.
The OP of the first thread was accused of trying to start an anti-Meltzer circlejerk, but he said that wasn't the intention.  He said, "I actually like Dave a lot and disagree with him sometimes. Go figure. I thought it was worthy of a discussion."  I'm always tempted to think that a thread like this is an attempt to start an anti-Meltzer circlejerk.  I'm probably overestimating how often this happens.  But it can lead to a circlejerk, so it's sort of like both intentions lead to the same thing.  If you were an AEW stan and you posted this is a gotcha towards WWE and Randy Orton, then there's a good chance it's going to lead to an anti-Meltzer circlejerk.  And if you're a WWE stan and you want to create an anti-Meltzer circlejerk, then you would also post this.
5:50 P.M.
There were some racism headlines recently.  The New York Times ran a headline that said: "JAMA Editor Placed on Leave After Deputy’s Comments on Racism."  A headline on Deadline.com said: "Sharon Osbourne Exits ‘The Talk’ After Allegations Of Misconduct & Racist Remarks; Show Returns April 12."
Lindsey (sp?) Ellis made a comment about Raya and the Last Dragon and deactivated her Twitter account--I assume temporarily.  People were dragging her on Twitter, and also accusing Jenny Nicholson of being racist.  I feel like there's this whole vortex you get sucked into once you start thinking about racism or transphobia all the time.  Here's how I imagine it:  Whenever you start to accuse people of being racist, you start to transform into one of those Parademons from Justice League.  I like Jenny Nicholson's videos, and I think, of every person on Twitter, she has the best Twitter account.  But she's starting to turn into a Parademon herself, because if you follow her timeline, a lot of her tweets are adopting the tone of "Ugh, racism!" or "Ugh, men on the internet!"
Now you might think, 'Hey, why would you use a metaphor from such a shitty movie to describe this?'  And the answer is that I think Parademons are shitty people, so they deserve a shitty metaphor.  I'm not going to use a highbrow metaphor to describe them; they don't deserve that.  Once you become a Parademon, you start feasting on other Parademons, as well as non-Parademon creatures.  But Parademons like to hang out in large swarms, so eventually they're just going to start feasting on each other if no one else is around.  Parademons started out as normal people, but once they were conquered by Steppenwolf/Darkseid, they transformed.
Here's a photo of a Parademon to show what I mean: 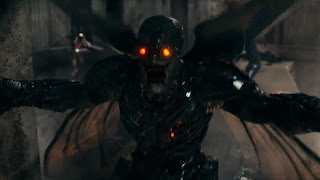 6:40 P.M.
Here's a tweet from some person talking about the Lindsay Ellis controversy, and including a screencap of another Twitter account with the handle @GreenlitGorls.  Lindsay Ellis has a lot of fans, so I think the narrative is starting to flow back.  This tweet is, like, three layers deep:

Just for context. This was the person who wanted me to answer for Lindsay Ellis (apparently) saying racist things. I'm never going to negate criticism, but at some point, ya'll have to understand that so much of this is a mob gleefully trying to take someone down. They don't care https://t.co/Sxwu8leUGg

6:45 P.M.
The top thread on Wreddit right now is a clip of Shawn Michaels talking to Bret Hart.  The other day, the top thread was a photo of VENY (a Japanese wrestler) hitting a moonsault.  Neither thread has a stan quality, and any thread about Japanese wrestling by nature won't have a lot of stan-like comments.
Posted by Jeremy Massler at 8:00 AM